Working with Elders in Zwolle

One of my favorite things to do is work with Elders.  We worked with Elders Stanley and Leach from Zwolle on October 10, 2012.  We did some look up and call back that didn't turn out to be productive, so we went knocking on doors.  It is always a pleasure to do that with Elders.  I really learn a lot when I go with Elders. 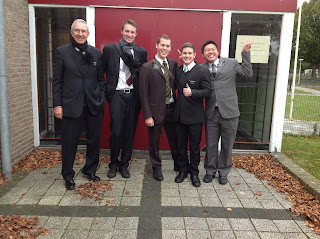 We knocked on the doors up and down the street.  Finally, we knocked on the door for house #33.  Both Elder Leach and I thought it was going to be a lucky door.  We were both excited to discover it was a young family.  The children were under 10.  The father listened to what Elder Leach had to share, but said he had no interest.  When asked if he know of anyone that might have a desire, the man gave us a name and an "I think he lives at #18 over on another street", and he gave us the name of the street.  We were not sure if it was a real referral or a practical joke. Non the less, we looked up #18 and it was the real deal.  Very nice young father who had almost given up looking for or ever finding the truth.  He asked very thoughtful questions as Elder Leach shared the message of the Book of Mormon.  We left him a Book of Mormon and our contact information, as well as information to get on the church website.  I felt the Spirit as Elder Leach taught at the door.  I know this young father felt it also.  He also had two of the cutest boys ever, maybe with the exception of my grandsons of course  :).

Thank you Elder Leach and Elder Stanley.
Posted by Zuster Robinson at 2:02 PM