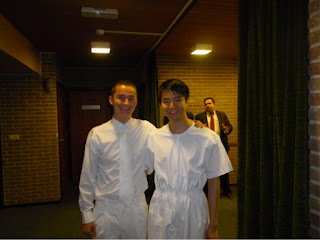 From the very first appointment we had with them. They knew it was true. The spirit was SO STRONG, we really didn't have to commit them to be baptized they were asking us about baptism. They are some of the most humble people I know. They are awesome and God was preparing them their whole life. They were really excited to make a promise with God, and willing to keep this promise for the rest of their lives! 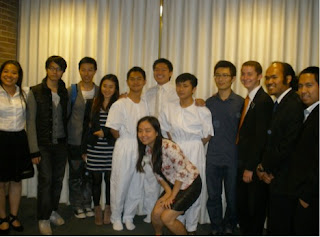 Jack and Leo with the Apeldoorn Yovo’s and Elder Van Rij
Within the first five minutes of our first appointment with Jack and Leo they were Golden. After the opening prayer the spirit was so strong that they were shocked and amazed at how they felt. From there on their faith just grew by leaps and bounds and taking the step of baptism was something that they couldn't wait for. 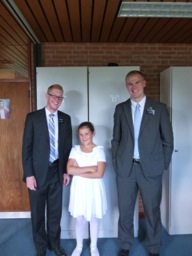 Ashley Bulder was baptized on the 23rd of June.  She is an awesome 12
year old girl with an impressive knowledge of the gospel.  She is now
preparing for the day that she can go to the temple with the branch! 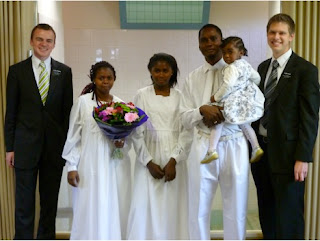 Rebecca Ngua is the wife of our most recent convert in Arnhem, Armand. And they are both the proud parents of two daughters, Alice (12 years old) and Jasmine (1 and a half). After Armand was baptized, we asked him if we were able to teach the rest of his family so that they all might eventually be sealed in the temple together. As we started to teach both Rebecca and Alice, they were both reluctant to be baptized and weren't very enthusiastic during the lessons. It made things even harder when Rebecca speaks hardly any Dutch and only French. So, there has been a huge language barrier. Eventually, both President and Sister Brubaker came on joint teach to help with translate in French. Then suddenly, miracles started to happen. Little by little, both Rebecca and Alice opened up more and eventually accepted baptism.  It was a struggle at first, but the Lord has blessed the entire family by opening their hearts to the gospel. 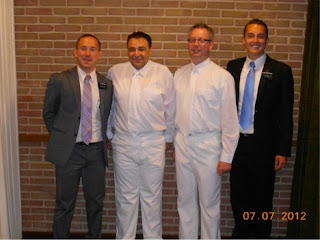 We found Mousa one day doing a 2-2-5 contact. We went  to go behind and to the 5 part of that process and the first bell we hit was Moesa. He let us in, and having only a few minutes, we gave him a Book of Mormon and scheduled an appointment to give him a church tour the next day. After a few days of contact, we  had  the impression that we needed to go visit him but because of circumstances we couldn't. So as we were biking home we got a call from Moesa and he told us that he had spent the previous 3 days reading in the Book of Mormon and he feels like a new person. He went on to say that there was a new light that came into his life and he loved it! Over the next couple of weeks we taught him what he needed to know and as the process went farther, we were able to help him overcome some issues and he was baptized on the 7th of July by another recent convert that we had taken on joint teach.
It was great to see the converting power of The Book of Mormon and the testimony that it gave to a man in just a few days of reading it. That truly is an inspired book!

Posted by Zuster Robinson at 8:21 PM