Kortrijk is a far southern part of the Mission and located in Belgium.  We arrive late on September 13.  We went to dinner in a little Belgium cafe in the centrum of the city.  This is an old city.  Records date back to 1395.  This will be a fascinating city to spend a P-Day exploring.

Elder Merrill and Elder Ombach are doing great work down here.  We spend the afternoon with them in a neighboring town, Iepers. 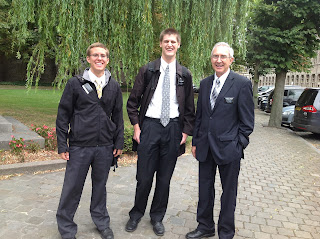 We were on a call-back from a referral from Salt Lake City.  The referral came from the Visitor's Center for the London Temple.  This young woman wanted to know more about 'forever families', and requested the missionaries to tell her more about that.  Disappointment, she was not at home.  So, we 2-2-5ed and spend 10 minutes going up and down the street before we left.

We went to the center of Ieper.  It was a cold, rainy day so not too many people were out and about.  Fall is definitely here.  In our walking around, we found the Flanders Fields Museum.  Ieper is the location of Flanders Fields during WWI.  Also, some may know the story of German soldiers and the British, French and Belgium Soldiers, during WWI upon hearing singing "Silent Night", and seeing Christmas Trees on the edges of the trenches, come out of the trenches on Christmas Eve 1914, were together around fires, enjoying each others company and played games. They also buried their dead, on both sides.  This truce lasted until New Years.  That happened near Ieper.
We will have to plan a P-Day to come back.  President is very interested.

We walked and contacted people along the way.  Elder Merrill is great at street contacting.  I need to spend time and have him help me with my street approach.  He does it very well.  I am impressed.  Elder Ombach was showing President how it is done.
We took the Elders back to Kortrijk and we headed home--a three hour drive with no traffic snarls.   There were a few traffic snarls and a few wrong turns on the 'snelweg', so it was late when we got home last night. 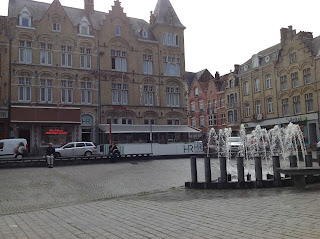 Centrum of Ieper
Posted by Zuster Robinson at 2:51 PM