The Mission Office received short notice that Elder Cockbain was arriving the morning of April 5, 2013.  Elder Cockbain had been in the MTC in Provo with Elder Alston and Elder Rowley, but returned to South Africa to finish visa issues.  We were not given any date for his arrival so we were surprised and delighted when notification came he would be coming Friday. 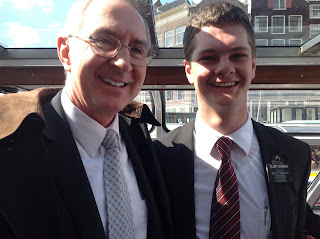 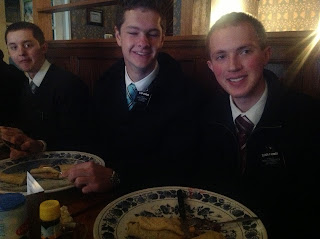 Lunch with President and I, the AP's and Elder Cockbain's new companion and trainer, Elder Farmer.  They will serve in Amsterdam.

This companionship was 'made in heaven'.  They are doing terrific missionary work together.

Posted by Zuster Robinson at 8:29 PM