P Day in Ieper with the Antwerpen and Gent Districts

The Kortrijk Branch President lives in Ieper, Belgium.  He offered to take the missionaries on a day tour of Flanders Fields and WWI battle sights.  It was great!  The trenches are something I have often wondered about.  Also, the famed "Christmas cease fire and singing of Silent Night".  Well, I got to look over the wooded area that was once a battlefield where that took place.

Here are just a few of our pictures of the day. 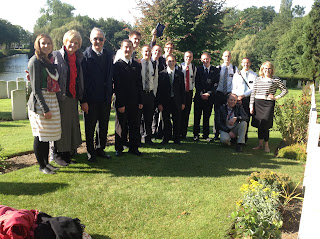 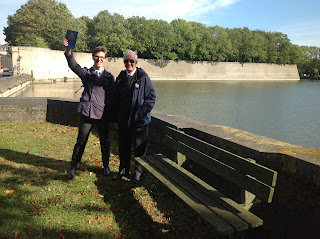 Elder Huff and his Book of Mormon with President outside the city of Ieper.  The old part of this interesting city is within that huge wall and surrounded with water. 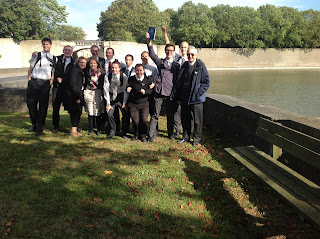 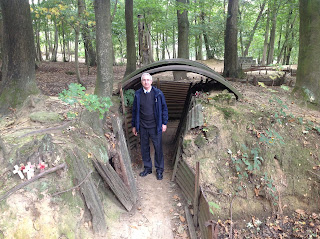 We visited Hill 62.  One of the main strong holds of the British forces during WWI.  These trenches and shell holes are original, they have been preserved, they have not be recreated.  This is all authentic. 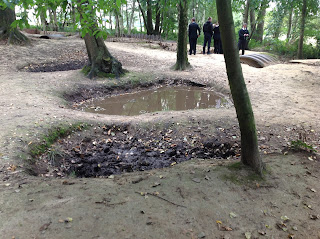 Shell holes.
Of course, the vegetation has grown back, the trees, but they have preserved the trenches. 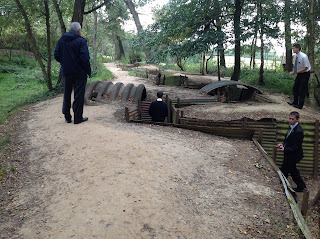 Really, the trenches were not that deep.  Nowhere in this trench system are you completely out of sight except for when it becomes a tunnel system. 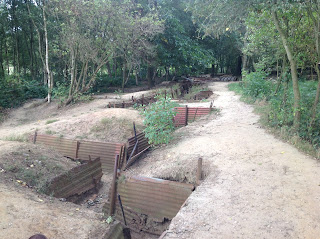 Really an eye opening experience.  I am grateful President and I saw the movie "War Horse" just prior to coming on our mission.  If you can visualize this whole area with blasted out trees, dirt mounts, and barbed wire all over the ground and strung everywhere. 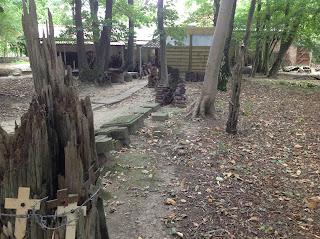 Here is a tree in the fore ground and another behind and to the right. They are original tree stumps left from the war.  There were only four or five left to see.  It is nearly 100 years ago that this war took place.

It was of special interest to President Robinson.  His Grandfather, Charles Christensen, fought in WWI and was a member of the 'Lost Battalion'.  He lived through the war and returned to Kanosh, Utah and to his family.  However, he died later of effects of the war on his health, leaving his wife, Freda, to raise their five children.  Their daughter, Leah Christensen, is President's mother.  President Alden Charles Robinson received his middle name from his Grandfather.
Posted by Zuster Robinson at 7:52 PM